Andrews’ Pitchfork is a line study consisting of three parallel trend-lines based on three points you select. This tool was developed by Dr. Alan Andrews.

The interpretation of a pitchfork is based on normal trend-line support and resistance principles.

The following chart of Xerox shows an Andrews’ Pitchfork. 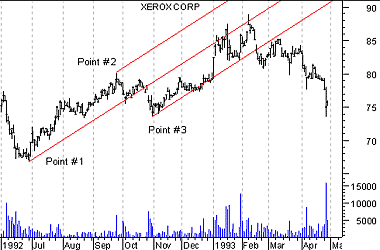 The pitchfork was displayed by selecting the three points shown. You can see how prices tended to “walk along” the trendlines.

The first trend-line begins at the left-most point selected (either a major peak or trough) and is drawn so it passes directly between the two right-most points. This line is the “handle” of the pitchfork. The second and third trend-lines are then drawn beginning at the two right-most points (a major peak and a major trough) and are drawn parallel to the first line. These lines are the “tines” of the pitchfork.