We want to consider the possibility of generating random returns with prescribed parameters … such as correlation. When one talks about the correlation between stock A and stock B, one usually means the Pearson correlation which would give, for example:

For example, if we look at the last five years of daily GE returns and wish to compare to the S&P500 returns we might get something like these distributions: 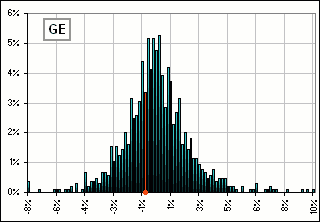 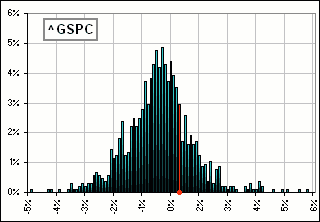 For these two sets, GE and S&P, it’s about 78% and if we plot each of those returns as a point (x, y) = (S&P return, GE return) we’d get something like Figure 1. The interesting thing is, if we wanted to know if there were some underlying relationship between the two variables (here they’re two sets of returns), then the Pearson correlation only tries to identify a linear relationship. That is, if y = Ax + B, the Pearson correlation between x and y would be equal to 1 … or 100%. 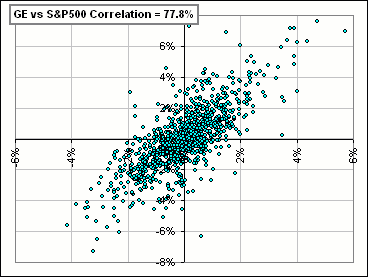 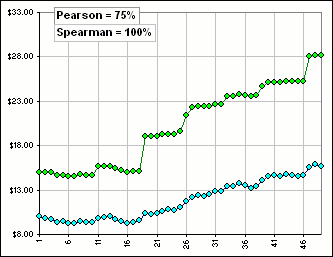 When one goes up or down the other is bound to go up or down in synchronism. However, the Pearson correlation is only 75% despite the fact that the two sets of returns are intimately related.

Indeed. Note, however, that the Spearman correlation is 1 (or 100%). n fact, Spearman measures not the linear dependence but the monotone dependence between …

Spearman assigns to each stock return its rank, so:

And that does … what?

It’s guaranteed to give 100% Spearman correlation if the stock A and stock B go up and down together. In fact, the two sequences of ranks are identical (for our fictitious stocks A and B with returns r and 100 r3), so the Pearson correlation of ranks is equal to 1 (or 100%). In fact, if we can change the second set to any increasing function of the first set, the ranks hence the Spearman correlation is unchanged.

For example, if the second set is r3 or er or log(1+r) or … whatever, the Pearson correlation remains unchanged.

I don’t see any copulas yet …

We want to see the “correlation” between stocks, so here’s what we can do: Remember Figure 1? It shows two separate distributions, and what fraction of returns lie in those wee intervals. We’d like – somehow – to put them both on the same distribution chart. We could, for example, combine Figures 1 and 2 to get Figure 3, where the separate distributions are shown … as well as the plot of (S&P return, GE return). 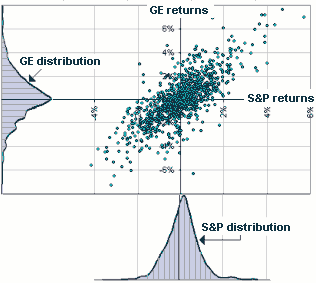 Patience, we’re not at cupolas yet.

Aha! You said Cupola! What does copula mean, by the way?

I have no idea

A distribution of ranks, right?

Right. But if there are say, 100 returns distributed in some weird way, we get a set of ranks, each being one of the numbers from 1 to 100, and they’re distributed uniformly.

So if we divide up the range 1 to 100 into 20 intervals, each of length 5, there’d be equal numbers of “ranks” in each subinterval. 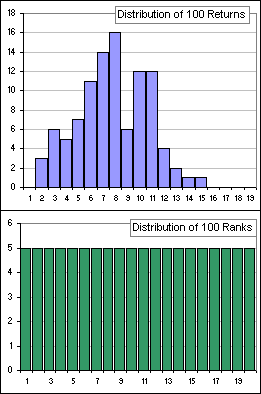 Yes, as illustrated in Figure 4

Are we there yet?

Not quite, but we should go slowly because …

I’d be happier if you’d just define a copula!

A copula is a probability distribution on a unit cube [0, 1]n for which every marginal distribution is uniform on the interval [0, 1].

No. Maybe you should go slow.

We invent some increasing function … like the blue curve in Figure 5. It runs from 0 at the left to 1 at the right. Now pick, at random number, any number, between 0 and 1. See the red dot at about 0.55? Now run to the right (to our blue curve) then down. See the magenta dot labelled r? Repeat a jillion times, each time choosing a random number from 0 to 1 (on the vertical axis, like our 0.55 above), and getting in return a number like r. If the distribution of random numbers selected (on the vertical axis) is uniform, then the numbers r will be distributed as shown in green. 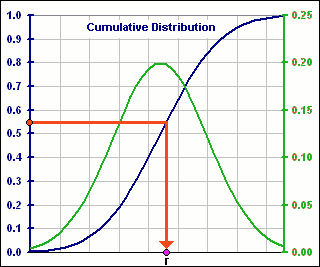 But that green curve is a standard, garden variety distribution … isn’t it?

Yes, just like Figure 1A and 1B, except it’s smooth because we invented a smooth blue curve. The point to notice is that we:

Start with some curve increasing from 0 to 1 (that’s the blue curve).
Select from a uniform distribution (the numbers selected at random on the vertical axis, like 5.5, above).
Then generate our (final) distribution function (that’s the green curve).

I thought we were talking about two stocks.

Well, two assets, like maybe stocks and bonds. So our probem is to generate a distribution for each asset so these two distributions have prescribed Mean, Volatility and Correlation. Then we’d like to generate something like Figure 6, where x and y are random variables and, for each pair (x,y), we have a probability that that pair will occur. The probability is given by the height of the surface.

It gives the probability that the two variables are exactly x and y?

Well, no. It’s the probability of being in some small neighbourhood of (x,y) … like Figure 1, above.

We’d like to construct a joint distribution (like Figure 6) with prescribed properties. To do this, we can use the following:

Yes. The various requirements say that C must be increasing and what she’s like along the boundaries of the unit square 0 ≤ x ≤ 1, 0 ≤ y ≤1.

And that defines C?

Hardly. There are a jillion functions of two variables that satisfy those requirements … and they’re all possible Copulas. The neat thing is that, having picked a Cupola, we can generate a joint distribution function for x and y (like the one shown in Figure 6). 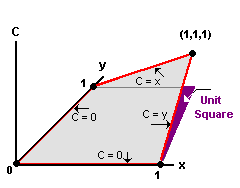 I lied. Figure 6 is the density distribution. C will give the 2-dimensional version of the blue curve in Figure 5 … like Figure 8.

Not at all. The magic formula is: 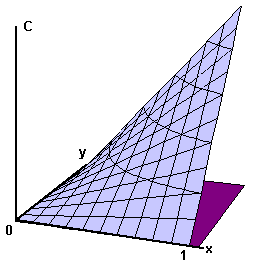 You pick it to suit your Copula requirements. We can also write that formula for C in a more sanitary form:

I assume it has a name?

Yes, it’s Frank’s Copula, named after M.J. Frank (who introduced it in 1979). >Are there others? Well, there’s Clayton Copulas and Gumbel with various types that go by the name of Gaussian or Archimedian (Frank’s is Archimedean) and …

Yeah, thanks. Can we stop now?