Pay attention! Before we run, we walk. For example, we introduced the 1-parameter family of Frank’s Copulas:

Then we generate Frank’s Copula via: 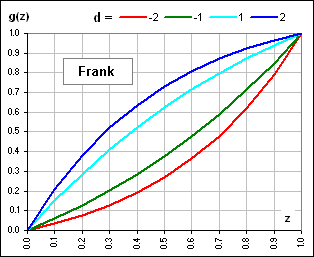 Like Figure 2a. See? It’s just a simple, monotone (increasing) function on [0,1]. Of course, that’s not the only such g(z) one can invent. How about:

Then, of course, there’s Gumbel’s Copula where 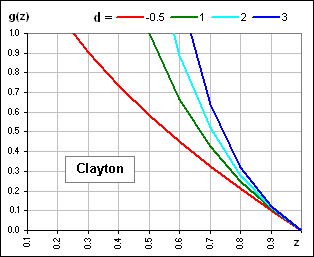 I think that’s enough. If I pick one, say Gumbo, what do I do with it?

Suppose we have two sets of data, say x and y, and we wish to identify the Mean and Standard Deviation of each and the Correlation (or maybe we should call it the Dependence) between them. That’s five variables: The Means and SDs, say M[x], M[y], S[x], S[y] and the “Dependence”, say K.

When we’re finished we’ll be able to generate x- and y-data with the prescribed Means and Standard Deviations and the prescribed correlation or “dependence”. Although we will usually be speaking of stock returns, the two sets of data may be the average age of drivers in 50 states (that’s x1, x2, … x50) and the annual number of auto accidents in those 50 states (that’s y1, y2, … y50). Or maybe the x- and y-data represent the annual cost of insurance claims and the cost of lawyer’s fees. Or maybe the efficacy of a drug or the relationship between $USD and $CAD or maybe …

Okay, but remember that we’re interesting in the Dependence of one on the other. In fact, we could easily look at the distribution of the x- and y-data and invent some distribution function that fits pretty well.

(Normal or lognormal, for example)

Aah, but if we then try to simulate these variables by random selection from our two invented distributions, it is highly unlikely that we’ll get any meaningful correlation. For example, suppose we do this, assuming that both sets look like they are normally distributed:

1. The x-set has Mean = 1.0 and SD = 3.0 and the y-set has Mean = 2.0 and SD = 4.0.
2. We generate a hundred values of x- and y-variables by random selection from two normal distributions with these parameters.
3. We plot the points (xk, yk) the get a scatter plot and we calculate some correlation.
4. Each time we do steps 2 and 3 we’ll get different results 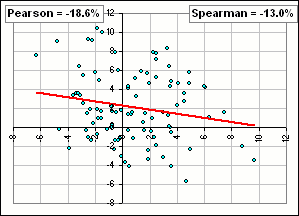 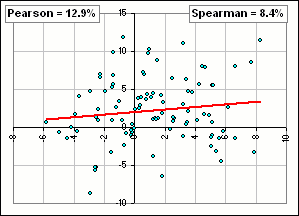 For a given x-value, say U, what’s the probability that x ≤ U? It’s F1(U)
… the cumulative probability distribution for the x variable..

For a given y-value, say V, what’s the probability that y ≤ V? It’s F2(V)
… the cumulative probability distribution for the y variable.

We make a random selection of 100 jillion values of x and 60 jillion times we find that x ≤ U.

We also make a random selection of 100 jillion values of y and find that 30 jillion times we got y ≤ V.

So why all the fuss about copulas and joint distributions and …?

We’d use F = F1F2 if the two variables were independent. However, we’re talking about “dependence” so, having selected an x, the y value may be restricted because of that dependence.

Why didn’t you say that before?

Hey! I’m just learning ’bout this stuff. A few days ago I didn’t know a copula from a cupola.

Okay, but in [B1], you’re assuming you know the individual distributions, right?

And you’d get a different joint distribution every time you decide to change copulas, right?

If I just gave you the joint distribution, would you accept it or would you pick a copula?

Aah, good point! In fact, no matter what joint distribution Function you gave me, there’ll always be a Copula satifying [B1].

You’re kidding, right? No matter what joint distribution I invent?

The Copula describes the dependence between variables, regardless of their individual distributions.

Copulas were invented (in 1959?) in order to isolate the dependence structure between variables.

Since the arguments of C are just uniformly distributed random variabes (namely F1(U) and F2(U)), what’s left is their dependence.

In fact, we can link together any two marginal distributions (F1, F2) and any Copula and we’ll get a valid joint distribution Function.

Okay! Can we continue?

Wait! Don’t you find that confusing? First you say x and y, then u and v, then U and V?

Here’s a picture … Figure 3. x is our random variable and U is a particular value of x and if we ask: 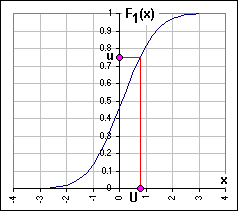 We’re almost there! Our new equation involves just the uniformly distributed variables u and v, see? To model them we just select numbers at random in [0,1] using, for example, Excels RAND() function, see?

Indeed, we can now conclude (via Sklar’s theorem) that:

Also: If we know the joint distribution F and marginal distributions F1 and F2, then there is a unique Copula according to [B2], namely:

The neat thing is, we can pick our Copula to model the dependence between variables without considering which type of marginals.

Yeah, but what Copula and how do you change the dependence?

That’s what I said!