Cycles allow us to accurately predict events in nature: bird migrations, the tides, planetary movements, etc. You can also use cycle analysis to predict changes in financial markets, although not always with the accuracy found in nature.

The prices of many commodities reflect seasonal cycles. Due to the agricultural nature of most commodities, these cycles are easily explained and understood. However, for some securities, the cyclical nature is more difficult to explain. Theories as to why certain securities exhibit cyclical patterns range from weather and sun spots, to planetary movement and basic human psychology. I feel human psychology is responsible.

We know that prices are a consensus of human expectations. These expectations are always changing, shifting the supply/demand lines, and causing prices to oscillate between overbought and oversold levels. Fluctuations in prices are a natural process of changing expectations and lead to cyclical patterns.

Many technical analysis indicators and tools were developed in an attempt to profit from the cyclical nature of prices. For example overbought/oversold indicators (e.g., Stochastic, RSI, etc) are designed to help you determine the excessive boundaries of a cycle.

The following illustration shows the major components of a cycle. 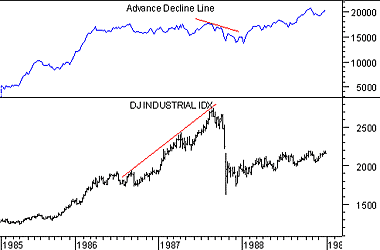 An entire book could easily be filled with a discussion of cycles and cycle analysis. In the following sections, I briefly explain some of the more popular cycles. A good starting point to learn more about cycles, and technical analysis in general, is Martin Pring’s book Technical Analysis Explained.

Keep in mind that, in hindsight, you can find patterns in anything. To successfully profit from cycle analysis, the cycle should have a strong track record and be used in conjunction with other trading tools.

28 Day Trading Cycle. Research in the 1930s found a 28-day cycle in the wheat market. Some attribute this to the lunar cycle. Regardless of the cause, many markets, including stocks, do appear to have a 28-day cycle. (The 28-day cycle is calendar days. This is approximately 20 trading days.)

10-1/2 Month Futures Cycle. Although individual commodities exhibit their own unique cycles, a cycle ranging between 9 and 12 months has been found in the CRB (Commodity Research bureau) Index.

January Effect. The stock market has shown an uncanny tendency to end the year higher if prices increase during the month of January, and to end the year with lower prices if prices decline during January. The saying is, “So goes January, so goes the rest of the year.” Between 1950 and 1993, the January Effect was correct 38 out of 44 times–an accuracy of 86%.

4 Year Cycle (Kitchin Wave). In 1923, Joseph Kitchin found that a 40 month cycle existed in a variety of financial items in both Great Britain and the United States between 1890 and 1922. The four-year cycle was later found to have an extremely strong presence in the stock market between 1868 and 1945. Although it is called a “four-year cycle,” the cycle length has been found to vary between 40 and 53 months.

Presidential Cycle. This cycle is based on the presidential election that occurs every four years in the United States. The concept is that stock prices will decline following the election as the newly elected president takes unpopular steps to make adjustments to the economy. Then mid-term, stock prices will begin to rise in anticipation of a strong election day economy.

9.2 Year Cycle (Juglar Wave). In 1860 Clemant Juglar found that a cycle lasting approximately 9 years existed in many areas of economic activity. Subsequent research found this cycle to have had a strong presence during the period of 1840 to 1940.

54 Year Cycle (Kondratieff Wave). Named after a Russian economist, the Kondratieff Wave is a long-term, 54-year cycle identified in prices and economic activity. Since the cycle is extremely long-term, it has only repeated itself three times in the stock market. 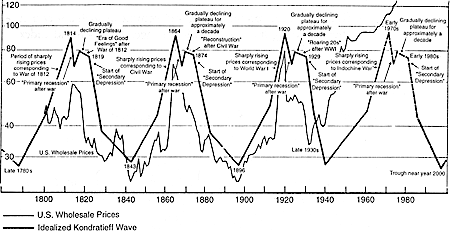