The logic behind envelopes is that overzealous buyers and sellers push the price to the extremes (i.e., the upper and lower bands), at which point the prices often stabilize by moving to more realistic levels. This is similar to the interpretation of Bollinger Bands.

The following chart displays American Brands with a 6% envelope of a 25-day exponential moving average. 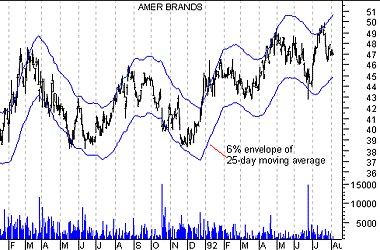 You can see how American Brands’ price tended to bounce off the bands rather than penetrate them.