where N is the number of contracts, P is the total closed trade profit, and delta is the parameter discussed above. The carat symbol ( ^ ) represents exponentiation; that is, the quantity in parentheses is raised to the power of 0.5 (square root).

Unlike with fixed fractional trading, the trade risk is not a factor in the fixed ratio equation. All that matters is the accumulated profit and the delta. The delta determines how quickly the contracts are added or subtracted. Also note that the account equity is not a factor. Changing the starting account size, for example, will not change the number of contracts, provided there is enough equity to continue trading.

As an example, consider the series of trades below. The starting account size was $50,000. The profit/loss per contract is shown in the second column (“PL/Contr”). The next column is the trade risk, which is not used in fixed ratio position sizing. The delta was $1500. The next column shows the number of contracts computed according the equation above. Multiplying the number of contracts by the profit/loss per contract results in the position profit/loss (“Pos PL”), which adds to the current equity value to give the new value of account equity, shown in the last column.

Trades and number of contracts in an example of fixed ratio position sizing. 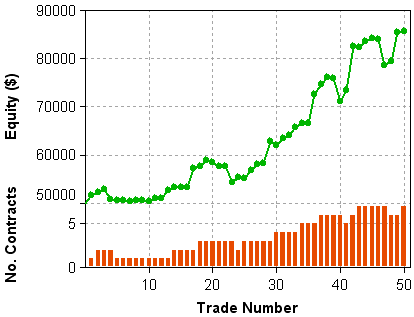 Equity curve and number of contracts in an example of fixed ratio position sizing.