The Four Percent Model is a stock market timing tool based on the percent change of the weekly close of the (geometric) Value Line Composite Index. It is a trend following tool designed to keep you in the market during major up moves and out (or short) during major down moves.

The Four Percent Model was developed by Ned Davis and popularized in Martin Zweig’s book Winning on Wall Street.

A significant strength of the Four Percent Model is its simplicity. The Model is easy to calculate and to analyze. In fact, only one piece of data is required–the weekly close of the Value Line Composite Index.

From 1961 to 1992, a buy and hold approach on the Value Line Index would have yielded 149 points (3% annual return). Using the Four Percent Model (including shorts) during the same period would have yielded 584 points (13.6% annual return). Interestingly, about half of the signals generated were wrong. However, the average gain was much larger than the average loss–an excellent example of the stock market maxim “cut your losses short and let your profits run.” 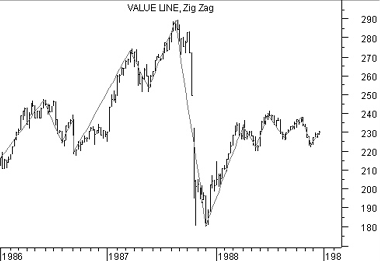 The Zig Zag indicator identifies changes in price that are at least 4%.