Fourier Transforms were originally developed as an engineering tool to study repetitious phenomena such as the vibration of a stringed musical instrument or an airplane wing during flight. It is used in technical analysis to detect cyclical patterns within prices.

It is beyond the scope of this book to provide a full explanation of Fourier analysis. Further information can be found in Technical Analysis of Stocks and Commodities (TASC), Volume One issues #2, #4, and #7; Volume Two issue #4; Volume Three issues #2 and #7 (Understanding Cycles); Volume Four issue #6; Volume Five issues #3 (In Search of the Cause of Cycles) and #5 (Cycles and Chart Patterns); and Volume Six issue #11 (Cycles).

The complete Fourier analysis concept is called spectral analysis. Fast Fourier Transform (“FFT”) is an abbreviated calculation that can be computed in a fraction of the time. FFT sacrifices phase relationships and concentrates only on cycle length and amplitude.

The benefit of FFT is its ability to extract the predominate cycle(s) from a series of data (e.g., an indicator or a security’s price).

FFTs are based on the principal that any finite, time-ordered set of data can be approximated by decomposing the data into a set of sine waves. Each sine wave has a specific cycle length, amplitude, and phase relationship to the other sine waves.

A difficulty occurs when applying FFT analysis to security prices, because FFTs were designed to be applied to non-trending, periodic data. The fact that security prices are often trending is overcome by “detrending” the data using either a linear regression trendline or a moving average. To adjust for the fact that security data is not truly periodic, since securities are not traded on weekends and some holidays, the prices are passed through a smoothing function called a “hamming window.”

As stated above, it is beyond the scope of this book to provide complete interpretation of FFT analysis. I will focus my discussion on the “Interpreted” Fast Fourier Transforms found in the MetaStock computer program. This indicator shows the three predominate cycle lengths and the relative strength of each of these cycles.

The following chart displays the Interpreted FFT of US Steel. 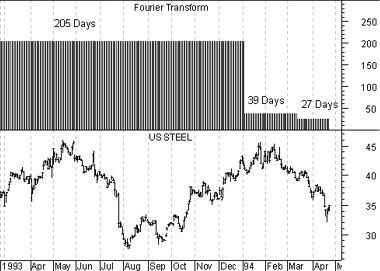 The Interpreted FFT shows that predominate cycle lengths in US Steel are 205, 39, and 27 trading days.

The longer the indicator remains at a specific value, the more predominate it was in the data being analyzed. For example, in the above chart, the 205-day cycle is five times stronger than the 39-day cycle, because the indicator was at 205 for a much longer period (the fact that 205 is five times greater than 39 is coincidental).

Once you know the predominate cycle length, you can use it as a parameter for other indicators. For example, if you know that a security has a 35-day cycle, you may want to plot a 35-day moving average or a 35-day RSI on the security.