Was that accidental … or was there really some correlation between levels?
Did the height at year 5 have an effect on the height in year 6?

Are you talking about river levels … or financial stuff?

Note the heights of the n flood levels:

Calculate the deviations from the mean:

Note that the set of xs have zero mean. Positive x’s indicate that the Nile level was above the average.

Note that the set of partial sums, the Y’s, are sums of zero-mean variables. They will be positive if there’s a preponderance of positive x’s. Note, too, that Y(k) = Y(k-1) + x(k).

This difference between the maximum and minimum of the n values is called the Range. Let s(n) be the standard deviation of the set of n h-values.

As it turns out, the probability theorist William Feller proved that if a series of random variables (like the x’s) had finite standard deviation and were independent, then the so-called R/s statistic (formed over n observations) would increase in proportion to n1/2 (for large values of n).

Yes. Apparently lots of people are interested in this animal. This guy, R/s, is called the rescaled range

A logarithm to what base?

It doesn’t matter. Anyway, what Hurst apparently found, was that the plot had a slope closer to 0.7 (rather than 0.5).

So, what’s that mean?

I guess it means that the annual Nile levels weren’t independent, but this year’s level might be expected to affect next year’s level. Indeed, if the slope of the log(R / s ) vs log(n) “best fit line” is H, then we’d expect:  R / s ∼ knH

Don’t tell me! That H is the Hurst Exponent, right?

So what’s it got to do with financial stuff?

So where’s the spreadsheet?

Do you realize that don’t have a single picture?

A picture is worth a thousand …

These devations are shown in green, in Figure 1.
(The average of these deviations is zero!) 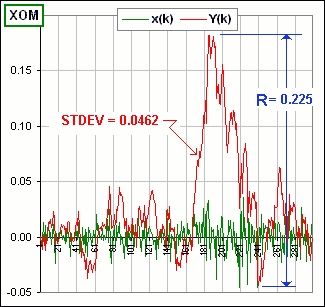 Now we find the maximum Y and the minimum Y and subtract them. That’s the Range, R = Max[Y] – Min[Y] … in blue. Finally we calculate the Standard Deviation of the h’s:

And you get a Hurst exponent … somehow?

Now we repeat the above scheme for 310 points, then 320 points etc. etc., each time generating a point on our chart, and … 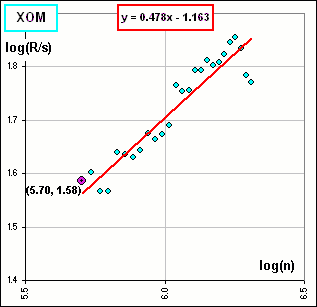 Just give us the chart, okay?

And the Hurst exponent is … uh, the slope?

Yes, and that’d imply that daily returns for XOM are random, uncorrelated, a Brownian motion, independent …

Yeah, yeah. Do you always get that?