The MACD (“Moving Average Convergence/Divergence”) is a trend following momentum indicator that shows the relationship between two moving averages of prices. The MACD was developed by Gerald Appel, publisher of Systems and Forecasts.

The MACD proves most effective in wide-swinging trading markets. There are three popular ways to use the MACD: crossovers, overbought/oversold conditions, and divergences.

The MACD is also useful as an overbought/oversold indicator. When the shorter moving average pulls away dramatically from the longer moving average (i.e., the MACD rises), it is likely that the security price is overextending and will soon return to more realistic levels. MACD overbought and oversold conditions exist vary from security to security.

The following chart shows Whirlpool and its MACD. 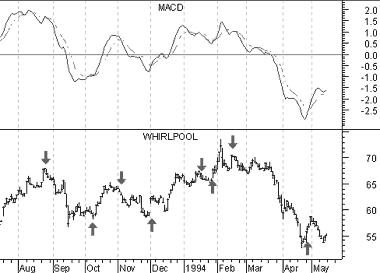 This chart shows that the MACD is truly a trend following indicator–sacrificing early signals in exchange for keeping you on the right side of the market. When a significant trend developed, such as in October 1993 and beginning in February 1994, the MACD was able to capture the majority of the move. When the trend was short lived, such as in January 1993, the MACD proved unprofitable.