The McClellan Oscillator is a market breadth indicator that is based on the smoothed difference between the number of advancing and declining issues on the New York Stock Exchange.

The McClellan Oscillator was developed by Sherman and Marian McClellan. Extensive coverage of the oscillator is provided in their book Patterns for Profit.

Indicators that use advancing and declining issues to determine the amount of participation in the movement of the stock market are called “breadth” indicators. A healthy bull market is accompanied by a large number of stocks making moderate upward advances in price. A weakening bull market is characterized by a small number of stocks making large advances in price, giving the false appearance that all is well. This type of divergence often signals an end to the bull market. A similar interpretation applies to market bottoms, where the market index continues to decline while fewer stocks are declining.

The McClellan Oscillator is one of the most popular breadth indicators (another popular breadth indicator is the Advance/Decline Line). Buy signals are typically generated when the McClellan Oscillator falls into the oversold area of -70 to -100 and then turns up. Sell signals are generated when the oscillator rises into the overbought area of +70 to +100 and then turns down.

If the oscillator goes beyond these areas (i.e., rises above +100 or falls below -100), it is a sign of an extremely overbought or oversold condition. These extreme readings are usually a sign of a continuation of the current trend. 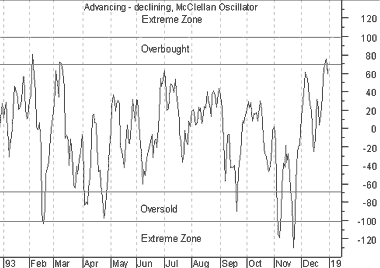 This next chart shows the McClellan Oscillator and the Dow Industrials. 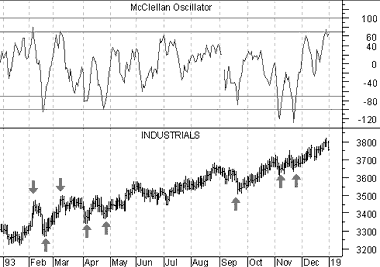 The McClellan Oscillator is the difference between 10% (approximately 19-day) and 5% (approximately 39-day) exponential moving averages of advancing minus declining issues.