Refer to the New Highs-New Lows indicator for more information on interpreting the NH/NL Ratio.

The following chart shows the S&P 500 and the NH/NL Ratio. 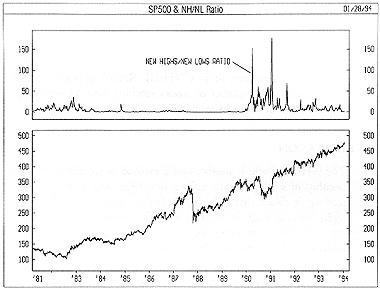 The Ratio increased dramatically when the S&P 500 began making new highs in 1990. However, as the S&P has continued to move on to new highs, the Ratio has failed to reach new highs. This implies that the S&P 500 is weaker than it appears.