The interpretation of the PSR assumes one premise: that of the short sellers, the public is the worst (well, except for the odd lot traders whose indicators begin with the Odd Lot Balance Index). If this is true, then we should buy when the public is shorting and sell when the public is long. Historically, this premise has held true.

Generally speaking, the higher the PSR, the more bearish the public, and the more likely prices will increase (given the above premise). Historically, it has been considered bullish when the 10-week moving average of the PSR is above 25% and bearish when the moving average is below 25%. The further the moving average is in the bullish or bearish territory, the more likely it is that a correction/ rally will take place. Also, the longer the indicator is in the bullish/bearish territory, the better the chances of a market move. For more information on the PSR, I suggest reading the discussion on the non-member short ratio in Stock Market Logic, by Norman G. Fosback.

The following chart shows the New York Stock Exchange Index and a 10-week moving average of the Public Short Ratio. 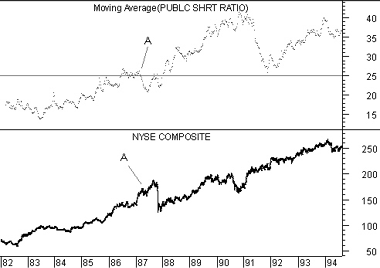 The PSR dropped below 25% into bearish territory at the point labeled “A.” Over the next several months, the PSR continued to move lower as the public became more and more bullish. During this period, prices surged upward adding to the bullish frenzy. The subsequent crash of 1987 gave the public a strong dose of reality.

Since the crash of 1987, the PSR has remained high, telling us that the public doesn’t expect higher prices–a bullish sign.