The Stochastic Oscillator compares where a security’s price closed relative to its price range over a given time period.

There are several ways to interpret a Stochastic Oscillator. Three popular methods include:

Look for divergences. For example, where prices are making a series of new highs and the Stochastic Oscillator is failing to surpass its previous highs.

The following chart shows Avon Products and its 10-day Stochastic. 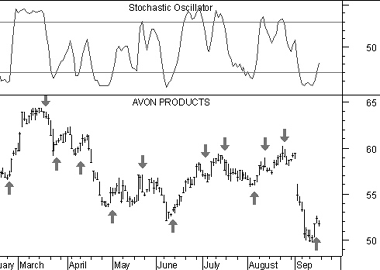 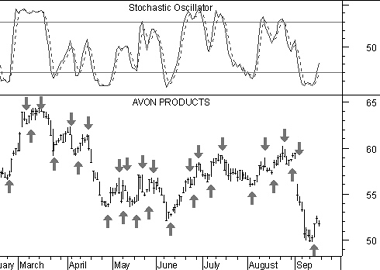 In this example I drew “buy” arrows each time the %K line rose above the %D (dotted). Similarly, “sell” arrows were drawn when the %K line fell below the %D line.

This final chart shows a divergence between the Stochastic Oscillator and prices. 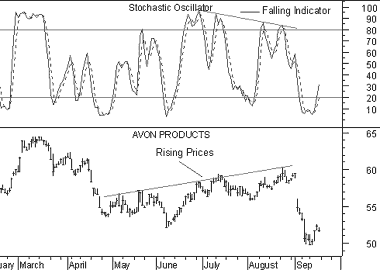 This is a classic divergence where prices are headed higher, but the underlying indicator (the Stochastic Oscillator) is moving lower. When a divergence occurs between an indicator and prices, the indicator typically provides the clue as to where prices will head.

The Stochastic Oscillator has four variables:

%K Periods.
This is the number of time periods used in the stochastic calculation.

%D Periods.
This is the number of time periods used when calculating a moving average of %K. The moving average is called “%D” and is usually displayed as a dotted line on top of %K.

The formula for %K is:

The above example used a %K Slowing Period of 1-day (no slowing). If you use a value greater than one, you average the highest-high and the lowest-low over the number of %K Slowing Periods before performing the division.