One often attempts to find some optimal strategy by varying certain parameters. Perhaps the problem is to find the optimal allocation of assets between stocks and bonds, given the Mean and Volatility of each asset. Perhaps it’s to decide the optimal rebalancing period (6 months? 12 months? 18 months?), given the characteristics of the individual assets.

Perhaps it’s to find the optimal …

Can you just give us an example?

Sure. Suppose we want to find the optimal allocation of money and we have two choices, namely two stocks whose annual Gain Factors have averaged G1 and G2 respectively (where, for a 12% return we put G = 1.12).

What stock would you choose, to invest your $1.00?

Uh … I have no idea. Besides, it’s ridiculous to get nothing and …

Probability x Value? Is that how you do it?

If you do, then you’re maximizing the Expected Value of your portfolio. That seems a reasonable thing to do, eh? However, let’s consider another problem and see what you’d do, using this “Maximize the Expected Value” ritual in order to decide on a strategy:

You have a choice:

Which do you choose?

Which do you choose?

Well, in real life, I’d actually choose #1 because it’s almost guaranteed.
But the correct answer, I’m sure, is #2 because the Expected Value is greater, eh?

Okay, now our last problem considered by one of the Bernoulli clan:

What’s the Expected Value of your winnings?

Yes, so suppose you’re allowed ten thousand tosses. Would you pay $10,000 for the privilege to play this game, realizing that your expected winnings are $10,000?

But if you had a run of forty, you’d win $240 and that’s over a trillion dollars!

So what would you pay?

You can pick your own number, but one often uses Utility Theory to compare two or more possible choices so the actual numbers aren’t as important as their ratios. Is the utility of this greater than the utility of that? Anyway, using 20, the sum is:

Well, then your personal bias is consistent with what Bernoulli said, in the 18th century. 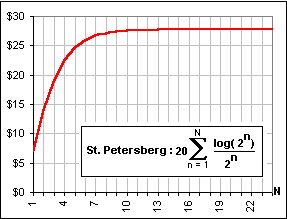 I get it! Forget statistical “Expected Value” and give me the logarithm!

The logarithm of the Expected Value is just one example of a Utility Function. You may have some other personalization, some other definition of optimal or best choice.

Why St. Petersberg, in Figure 1?

That’s the name of the problem: the St. Petersburg Paradox or, if you prefer, the St. Petersberg Paradox. (A paradox because the Expected Return is infinite yet no rational person would pay a fortune to play the game). It was posed by Nicholas Bernoulli and solved by his cousin Daniel Bernoulli who introduced this logarithmic Utility function. 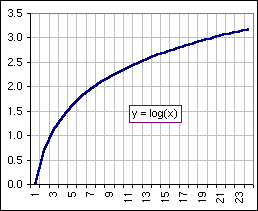 Indeed, Daniel wanted a diminishing marginal utility, a function which increased less and less rapidly (the graph is concave DOWN, like the graph in Figure 2) such that the infinite series would converge to a finite value. We could choose another Utility Function, but we’d want to guarantee a finite sum:

where p(x) is the probability of the outcome “x”, and U(x) the Utility of “x”. For example, you could choose the square root: U(x) = SQRT(x) which is also concave down. The amount you’d pay (to play the Petersburg Game) would then be:

So, pick your own personalized Utility!

Besides, we’re trying to explain human behaviour as it relates to risk and return. One is unwilling to pay a great sum for the chance to win a HUGE sum if the chances are slim. Lotteries which pay millions don’t charge hundreds of dollars. So, it’s not the amount of money that’s important, it’s our perception … it’s the Utility we attach to the money. It’s kind of like the dollar value of a car. As the dollar value goes up, the quality goes up. You get what you pay for … more expensive, better built … but a $100K car doesn’t have twice the quality of a $50K car so the quality doesn’t go up as fast as the dollar value. We could attach a Quality value as a function of the dollar value, say Q(x) where $x is the dollar value and maybe Q(x) = sqrt(x) so that …

I haven’t the faintest idea what you’re talking about.

Okay, let’s consider the SQRT(x) Utility Function and how it relates to possible winnings. Suppose the expected value of our winnings is $50 or $150.  Is a $150 winning three times more tempting than a $50 winning? 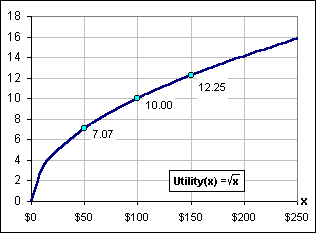 So, choosing an appropriate Utility Function reflects the importance that humans place on money. We’re more interested, NOT in the value of money, but in the value of its Utility. 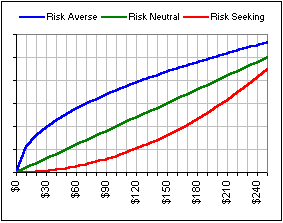 That’s what I’m trying to tell you! I hate to lose. In fact …

That Risk seeking curve? It’s not concave down!

That’s okay, so long as it doesn’t increase too rapidly. We’ll talk about that … later. In the meantime, we’ll assume it’s always increasing (meaning “more is always better”).