Here, we want to describe the logic behind the Black-Scholes Option Pricing Formula which looks like this:

What do all those symbols …?

We’re not going to derive the formula … just give some indication of how it arises. We’ll be talking about a cumulative distribution function, F(x), and its derivative, f(x), the density distribution. Typical charts might look like this where the slope of the F-curve, namely dF/dx, is the f-curve and the area beneath the f-curve is the F value. 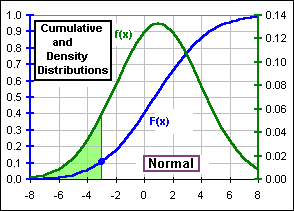 If x is a random variable (distributed according to some distribution, as shown), then the Mean or Expected value of x is E[x] =

. Further, if we want to know the Mean or Expected value of some Quantity that depends upon x, say Q(x), then it’s E[Q(x)] =

. In particular, the squared deviation of the x’s from their mean, namely (x-m)2, has an Expected Value of

which we recognize as the square of the Standard Deviation.

Just what’s the purpose of all this?

Okay, let’s just plunge right in: We know that, at expiry of a Call Option, if S is the stock price and K is the Strike Price then the Option is worth S – K provided S is greater than K … or it’s worth nothing (if S is less than K). In other words, the Option Price (at expiry) is the maximum of S – K or 0, namely:

Ah, but that’s at expiry of the Option. If the Option expires t years (or months or weeks) in the future, what’s the Option worth now? Suppose that, t years in the future, the stock price is x. Then the Option, at expiry, is worth Ct = Max(x – K, 0), according to Equation (1). The Expected Value of this Quantity, assuming some distribution of yearly (or monthly or weekly) stock returns, is then

which we recognize as

It’s the Present Value of E[Ct], assuming a risk-free rate of, say, r. That means it’s worth

where F is the cumulative distribution.

Where did that e-rt come from?

And where did e-rt come from?

We assume continuous compounding, so if we subdivide a year into N periods, the interest rate for each period is r/N and the number of periods is N so we have (1+r/N)N as the yearly growth, at the annual rate r … if the compounding is continuous.

And where did e-rt come from? 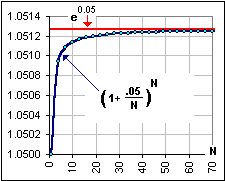 The math is much, much nicer. Besides, this calculation of present value is what one means by “risk-neutral”: the value of an asset at time t discounted to its present value using the risk-free rate. The two pieces in Equation (4) will give rise to the two pieces of the Black-Scholes formula in Figure 1.

… but what’s the distribution function?

Here’s where we make a simplifying assumption: we assume that these g’s are Normally distributed and, since 1+r = eg, this means that we’re assuming that the returns r1, r2, etc. are Log-normally distributed. This identifies the functions f(x) and F(x) and makes possible the evaluation of the integrals in Equation (4).

Don’t worry, I don’t intend to evaluate any integrals. It’s much too scary for me.