The Elliott Wave Theory is named after Ralph Nelson Elliott. Inspired by the Dow Theory and by observations found throughout nature, Elliott concluded that the movement of the stock market could be predicted by observing and identifying a repetitive pattern of waves. In fact, Elliott believed that all of man’s activities, not just the stock market, were influenced by these identifiable series of waves.

With the help of C. J. Collins, Elliott’s ideas received the attention of Wall Street in a series of articles published in Financial World magazine in 1939. During the 1950s and 1960s (after Elliott’s passing), his work was advanced by Hamilton Bolton. In 1960, Bolton wrote Elliott Wave Principle–A Critical Appraisal. This was the first significant work since Elliott’s passing. In 1978, Robert Prechter and A. J. Frost collaborated to write the book Elliott Wave Principle.

1. Action is followed by reaction.

2. There are five waves in the direction of the main trend followed by three corrective waves (a “5-3” move).

4. The underlying 5-3 pattern remains constant, though the time span of each may vary. 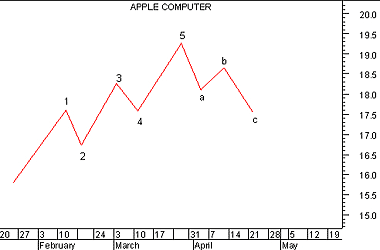 The following chart shows how 5-3 waves are comprised of smaller cycles. 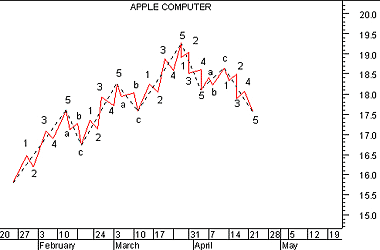 Elliott Wave practitioners use their determination of the wave count in combination with the Fibonacci numbers to predict the time span and magnitude of future market moves ranging from minutes and hours to years and decades.

There is general agreement among Elliott Wave practitioners that the most recent Grand Supercycle began in 1932 and that the final fifth wave of this cycle began at the market bottom in 1982. However, there has been much disparity since 1982. Many heralded the arrival of the October 1987 crash as the end of the cycle. The strong recovery that has since followed has caused them to reevaluate their wave counts. Herein, lies the weakness of the Elliott Wave Theory–its predictive value is dependent on an accurate wave count. Determining where one wave starts and another wave ends can be extremely subjective.