Equivolume displays prices in a manner that emphasizes the relationship between price and volume. Equivolume was developed by Richard W. Arms, Jr., and is further explained in his book Volume Cycles in the Stock Market.

The figure below shows the components of an Equivolume box:

The bottom scale on an Equivolume chart is based on volume, rather than on dates. This suggests that volume, rather than time, is the guiding influence of price change. To quote Mr. Arms, “If the market wore a wristwatch, it would be divided into shares, not hours.”

Especially important are boxes which penetrate support or resistance levels, since volume confirms penetrations. A “power box” is one in which both height and width increase substantially. Power boxes provide excellent confirmation to a breakout. A narrow box, due to light volume, puts the validity of a breakout in question. 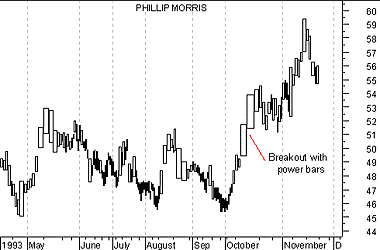 Note the price consolidation from June to September with resistance around $51.50. The strong move above $51.50 in October produced a power box validating the breakout.

The following is a Candlevolume chart of the British Pound. 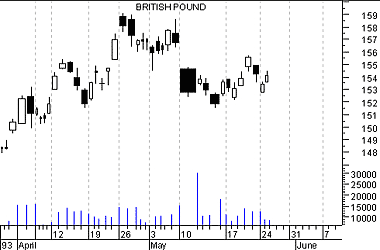 You can see that this hybrid chart is similar to a candlestick chart, but the width of the bars vary based on volume.