A basic principle of technical analysis is that security prices move in trends. We also know that trends do not last forever. They eventually change direction and when they do, they rarely do so on a dime. Instead, prices typically decelerate, pause, and then reverse. These phases occur as investors form new expectations and by doing so, shift the security’s supply/demand lines.

Chart patterns can last from a few days to many months or even years. Generally speaking, the longer a pattern takes to form, the more dramatic the ensuing price move.

A triangle occurs as the range between peaks and troughs narrows. Triangles typically occur as prices encounter a support or resistance level which constricts the prices.

Just as pressure increases when water is forced through a narrow opening, the “pressure” of prices increases as the triangle pattern forms. Prices will usually breakout rapidly from a triangle. Breakouts are confirmed when they are accompanied by an increase in volume.

The most reliable breakouts occur somewhere between half and three-quarters of the distance between the beginning and end (apex) of the triangle. There are seldom many clues as to the direction prices will break out of a symmetrical triangle. If prices move all the way through the triangle to the apex, a breakout is unlikely.

The following chart shows Boeing and a descending triangle. 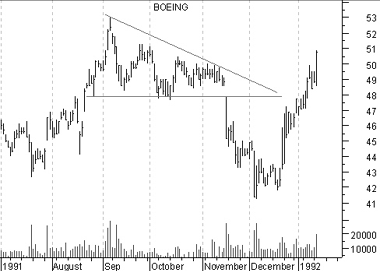